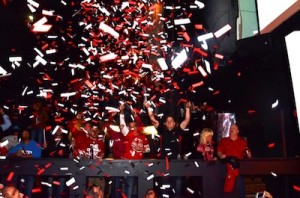 You know that moment when confetti rains down on coaches, players and fans after a hard-fought Bowl Game victory?  It’s a spectacular and magical moment and one that’s truly deserved after all the sleepless nights, grueling workouts, and media pressure teams endure.

To make that moment perfect for your impending bowl game victory, you need the right setup of confetti cannons and blowers on the field.  With football bowl season fast approaching, Flutter FETTI has what you need to get the job done and get it done quickly.

How to make it rain confetti

The quintessential post-victory stadium scene involves team-colored confetti raining down on the entire field.  To make this effect occur, you need multiple large and powerful confetti blowers.  By using 6” Continuous Flow Confetti Gerb Launchers, you can spew a pound of confetti every second up to 100 feet in the air – that’s 10 stories high!  See for yourself the awesome power of the Gerb:

How to shoot streamers skyward

If you’re looking for a special effect that packs more punch, the X-6 Double Barrel Wireless Confetti Launcher can shoot streamers skyward and help you celebrate an exciting bowl victory with all the pomp and circumstance you imagined.  With its dual 42”-long barrels and Co2 cylinders, this confetti cannon makes massive metallic streamers soar across a stadium like rocket ships!  Watch it in action at a recent sports game victory:

For the most electric, awe-inspiring special effect, give your bowl victory a confetti celebration that’s as exciting as fireworks, but much safer.  The 9 Barrel POD Remote Control Confetti Launcher is a confetti cannon with 9 distinct barrels and a pre-programmable on-board microprocessor so you can setup the sequence and positioning of each shot just the way you want.  Launch confetti, streamers or both and leave your team and fans in absolute awe of your victorious celebration!

How to make a more intimate confetti moment

For a unique, intimate confetti moment that the football team’s hard-working coach is sure to love, use the Surprise Box and unleash a mini storm of confetti right beside and above him.  It’s just like pouring Gatorade over the coach’s head, only far less cold and way more colorful!  Plus, all the players and coaching staff can join in the fun and embrace the excitement of a bowl victory together.

Almost all of our confetti cannons and confetti blowers are available to rent or purchase.  For more information and more great special effect ideas for football bowl victories, contact our expert confettiologists at 877-321-1999.