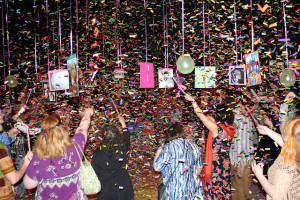 Throwing a surprise birthday party is a challenging endeavor.  You’ve got to organize the guests, sneak around town to pick up supplies, hide the gifts, and most importantly, keep it all one big secret.  So when the moment comes, you want it to be much more exciting than just everyone saying “Surprise”.

1. Toss Colorful Confetti – what if your huge “Surprise!” moment came in a rainbow of colors?  As the birthday guest opens the door, shower him or her in a cloud of colorful confetti from 14” Flutter FETTI Confetti Sticks!  A lot of color goes a long way and that simple surprise becomes an elegant and magical affair.  The pictures look amazing too with the birthday honoree’s face lit up and confetti flying all around!

2. The Slow Build-Up – this surprise birthday plan is absolutely epic!  Start off with just you and the birthday honoree at a location of your choosing – your house, a bar, a concert hall – and have friends slowly come in one by one.  So the first friend shows up, then 10 minutes later another friend shows up, and then 10 minutes later another one until the whole place is a rocking party.  It’s like a never-ending surprise!  Have everyone walk in with a 6” Flutter Flicker Confetti Launcher to make each entrance that much more memorable.

3. Host an Open Bar – everyone loves an open bar and it’s always ten times better when you didn’t see it coming.  Ask all the surprise guests to chip in for an hour or two of open bar at the birthday guy or gal’s favorite watering hole.  After the eventful “Surprise!” start handing out his or her favorite shot or cocktail and get the party started.

4. Host the Party Outside – everyone expects an indoor party to be a surprise, so make it even more of a shock by doing it outside.  You can have the surprise birthday party at a local park, at a beach bonfire spot, or even at the top of the ski slopes.  When the guest of honor arrives, have biodegradable tissue confetti from Flutter FETTI ready to flick.  It’s a colorful and refreshing way to kick off a birthday celebration!

5. A Treasure Hunt – the treasure hunt concept is similar to the sorority ‘clue week’.  As the birthday guy or gal starts the day, provide an initial clue that leads to another clue and then another clue and so on until he or she eventually ends up at the final surprise birthday locale.  Friends and family members can be included in the clues to make each one more exciting.  It’s a lot of upfront work to design the treasure hunt, but the smiles and laughter make up for it all!

6. Deck The Halls with Streamers – this is another play on the standard at-home “Surprise!” party.  Wrap the entire house in streamers – from the doors to the stairwells to the toilets – put up a streamer banner with the phrase “Happy Birthday”, and when the birthday honoree arrives, toss Metallic Streamers from 9” Airless Launchers.  With a consistent theme running through the entire house, it’s the most decorative way to say happy birthday!

7. The VIP Treatment – this surprise birthday party begins by telling the birthday honoree he or she is having a normal night at the club.  Then have a limo pull up with a few friends inside.  When you arrive at the club, skip to the front of the line and walk inside to a VIP table where more friends are waiting.  It’s a treatment they’ll never expect and a night they’ll always remember!

8. Event Tickets – everyone has a favorite band, DJ, or sports team.  Find out who it is and get tickets for a time before or on the birthday.  Surprise the birthday guy or gal with tickets and have all your friends join the fun too.  It’s not a typical party, but it’s an unexpected gift that’s perfect for celebrating a birthday.

9. The Masquerade – invite the guest of honor to a costume party where he or she supposedly knows no one.  After you walk in, say hello to the host and a few other masked people.  When the time is right have everyone simultaneously reveal their true identities.  It’s a cute way to throw a surprise birthday party; plus everyone loves a masquerade theme.

10. Vacation Surprise – this one is costlier than most and perfect for couples, but if you can pull it off it’s worth every penny.  Set up a trip for just the two of you (you and the birthday honoree).  Set some expectations that this is simply a fun birthday trip, not a romantic one.  When you arrive at the destination airport, hotel, or beach, have all your friends waiting there to party with you!  If you do it right, there will be zero disappointment and tons of excitement!

About Flutter FETTI®: Flutter FETTI is an innovator, manufacturer, and worldwide distributor of confetti and streamer products.  Our mission is to bring excitement and joy into every special event in your life.  Contact one of our confettiologists and we’ll make the right product recommendation to add the “WOW!” effect to your surprise birthday party.