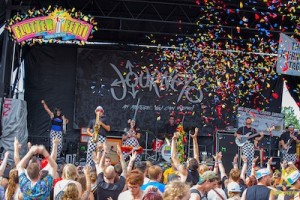 Concert production managers who use confetti at the climax of the show face a similar situation. Confetti is so much fun to use, but choosing the perfect ensemble for a venue – particularly an outdoor venue – can be challenging. The experts at Flutter FETTI are here to help you make your outdoor concert confetti decision.

A massive outdoor concert, whether it’s held at a park, fairground or country farm, is the perfect place to WOW the crowd with FETTI! The open land and endless sky means there is plenty of space to create a blizzard of color and shapes.

Using multiple 6” Continuous Flow Confetti Gerb Launchers is the best way to go here because it gives you the biggest thrill in the shortest amount of time. By launching 1 lb. of confetti 100’ into the air every second, you can practically blanket the entire venue with fluttering, floating and flying FETTI. Our all-white tissue Corkscrews confetti spiral in the air, creating a drop-dead beautiful special effect for an upscale artist’s finale.  The colorful and musical scene captures what outdoor concert venues are all about: an all-encompassing sensory experience!

Some outdoor concerts are put together on a much smaller scale, taking up a cornered-off street or a local public park. Despite the tighter space, the excitement level can be ramped up to equal any larger show, especially when confetti and streamers are thrown into the mix.

Fortunately, there are smaller versions of the most popular confetti blowers and machines. The Continuous Flow ‘Baby’ Gerb Launcher produces the same special effect as it’s larger cousin, except the confetti only flies up to 50’ high so it’s more manageable and closer to the crowd. If the concert venue or band has enough staff, putting a team member or two in charge of confetti can allow you to use portable Master Blaster Co2 Confetti Launchers, giving you more flexibility in when and where you shoot confetti. Either way, intimacy will give way to excitement and concertgoers will be happier for it!

When a concert venue is situated beside a body of water, such as an ocean, lake or river, one has to be cognizant of environmental factors. Even though Flutter FETTI tissue confetti is biodegradable, the last thing you want to do is cover an aquatic habitat in paper.

In this case, confetti cannons that direct streamers away from the water are a better option. The effects are more targeted, the wind is less likely to carry streamers away into the water, and the cleanup is easier in case they do go rogue. The special effect of streamers is completely mesmerizing, especially when you use X-6 Double Barrel Wireless Confetti Launchers or a 9 Barrel “POD” Confetti Launcher. Concert fans will love the streamers so much that they’ll probably forget the water was ever there.

With all three main scenarios listed, hopefully you can narrow down your choices and pick the perfect confetti or streamers for your outdoor concert. It’s never easy being a concert production manager, but it sure is a heck of a lot of fun!

Please share with us any of your photos and videos of Flutter FETTI at outdoor concerts via our submission form. And let us know if you have any other scenarios or recommendations in the comments below!