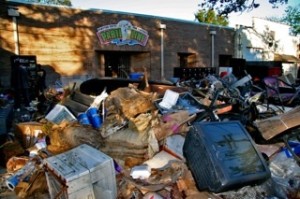 In August 2005, the “big one” came to New Orleans.  You could say it was bigger than anyone expected and its destruction was so devastating that we still feel its impact today.  In fact, it feels like it was only yesterday and yet it was eight years ago.  The “big one” was Hurricane Katrina.

That summer, Flutter FETTI was operating out of a beautiful office space and warehouse in New Orleans.  Business was growing steadily and we had just made the final payment on a new (and very expensive) guillotine cutting machine.  At the same time, news started trickling in about a hurricane named Katrina forming in the Gulf.  As the days went by, it grew significantly larger and looked like a direct strike was imminent.  The warnings came next and we knew we had to do something.

Our initial plan was to stay in the factory mezzanine high above the ground, but the day before it hit, Jon and I decided it would be best to leave town.  I threw everything I could think of into about 17 large bags while Jon, the typical male, packed one small tote.  My 90-year old mother, who lived with us, joined our journey and we convinced her caretaker to come along too.  Last, but not least, Jon grabbed the dogs – our two little bichons known as Flutter and Fetti!  We all caravanned to Florida while Dario and Vincent (our two main employees) voluntarily stayed back to run the factory “after the storm passed”.

The next day Katrina hit and everything changed.  The whole city flooded and finally, after days of desperately trying to reach Dario and Vincent, we learned that our office and warehouse were completely destroyed.  All our hard work and everything we had built… gone in an instant.  Worst of all, we had no flood insurance.

We convinced Dario and Vincent to come to Florida (where luckily my two cousins lived and thankfully agreed to take us all in) and we sat down to discuss options.  It was at that moment we realized we still had a huge contract with Paul McCartney’s World Tour and had an obligation to fulfill the order.

With everything wiped out in New Orleans, our only option was to find a new factory to set up shop and we needed to find one fast!  We reached out to the manufacturer of our guillotine cutting machine and he recommended a distributor in a nearby Florida town.  His name was Gene Hancock – he was our angel in disguise – and he had a warehouse, a cutting machine, and other supplies that would fit our needs perfectly.  We had tissue overnighted from our tissue manufacturer and work began immediately.  Only 7 days after the storm, we shipped the full order to Paul McCartney’s World Tour!

We were unable to return to New Orleans for several months to inspect the full damage.  It turns out that while the storm destroyed our factory, the floodwater came within two blocks of my home in New Orleans and stopped (thank goodness!) so I still have a home there.  I adore the city so much – it’s food, music, and culture – so I continue to go back and forth between New Orleans and Florida.  Now that we’ve decided to keep our factory in Florida, I know I’ll eventually have to make a permanent home here.

Sometimes fate steps in and puts us on another journey in life.  It’s been eight years since Katrina and we’re still paying off loans from that tragedy, but I’m proud to say that Flutter FETTI has survived with the help of our wonderful clients!  I’m blessed to have them carry on the dream of Flutter FETTI’ing the world!  Without them we would have never made it.