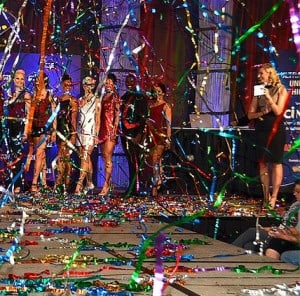 There’s a good chance you realize that pageant shows are the most competitive contests in the nation.  They’re a grueling mix of beauty, brains and talent and the women who compete put everything they’ve got into winning the show.  Would a little confetti go a long way in making a pageant victory extra sweet?  You bet it would!

The color, the emotion and the significance of confetti make it the perfect ending.  With the right products, your victory can be as spectacular as the professional pageant scenes shown on TV.  What type of confetti and confetti cannons are best?  We break it down for you.

Although child pageant shows are often described as ‘competitive’, you have to remember that they’re still just kids.  Regardless of what’s at stake, it’s important to create an atmosphere that is fun, fair, and collaborative.  When crowning the victor, all the children should get involved in the celebration to applaud everyone’s achievements.  Hand each child a pair of 6” Flutter Flickers and let them cover the stage – and each other – in colorful tissue FETTI.  It’s beautiful, simple and enjoyable for everyone!

When it comes to teen and adult pageants, the stage is literally an all-out competition for scholarships, prestige and the crown.  As the pageant committee, you’re usually in charge of the celebration and that means setting up and unleashing the victory confetti.  These two confetti launchers are perfect for smaller pageant shows:

Pomp and circumstance is expected at larger pageant shows for teens and adults, which is why larger confetti cannons are required.  When you want to go all out, there are two launchers that will get the celebration started right:

Does your pageant fall on a national or seasonal holiday?  You can customize confetti colors to match the holiday theme (think of red, white and green tissue confetti for your Miss Christmas pageant show).  You can also purchase die-cut confetti in specific shapes, such as red, white and blue star-shaped confetti for July 4th pageant shows.  There are practically limitless options, so you can find the perfect confetti and streamers for your event.

Have you used Flutter FETTI for a recent celebration?  Submit your photos here and share it with the world!  For any questions or to plan your pageant show confetti, contact us and our team of confettiologists will be more than happy to assist.