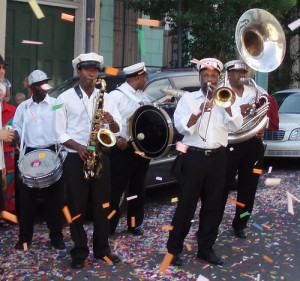 Whereas Mardi Gras is the wild side of New Orleans, the French Quarter Festival is the city’s heart and soul.  This springtime festival held in the historic French Quarter is a fusion of the city’s best music, food, crafts and culture.  Most importantly, it’s a celebration of local life where everything you eat, smell, and hear evokes a little bit of southern Louisiana.

So you want the most authentic New Orleans music experience?  Make sure to come early and check out the big parade that kicks off the French Quarter Festival (and in many ways, the entire festival season).  Support the marching bands with your cheers, claps, and tosses of biodegradable tissue confetti from 14” Flutter FETTI® Confetti Sticks.  It is a kick-off party after all!

Unlike the pricey Jazz Festival, the French Quarter Festival is absolutely FREE!  Expect the historic district streets to be packed with people throwing caution to the wind and dancing, frolicking, and grooving to the sounds of trumpets and drums.  Stages are spread out across the entire French Quarter and some of the best and brightest local musicians jam out day and night.  In fact, there are over 20 stages and over 1,000 musicians eager to play, including Soul Rebels, Raw Oyster Cult, and Preservation Hall Jazz Band.  To have the opportunity to get up close and personal to all these great bands is almost surreal!

If there is one thing better than the music at the French Quarter Festival, it could only be the food.  The city’s best restaurants set up shop from Jackson Square to Woldenberg Riverfront Park and serve up the most phenomenal snacks and sandwiches.  You can chow down on tons of local “delicacies” like barbecue shrimp po-boys, alligator sausage cheesecake, crawfish crepes, and Cajun meat pies.   You’ll walk away from the festival stuffed and satisfied, guaranteed.

Besides the music and food, the weather is fantastic in New Orleans during the French Quarter Festival.  Everyone is soaking in the warmth of the sun and hanging out in the streets – one street in particular.  Bourbon Street is ground zero for the party crowd and the place to mingle and have a drink.  If you want to duck into one of the wild watering holes, try your luck at karaoke in Cat’s Meow or catch some tunes at The Famous Door or Razzoo.  A few floors above the Bourbon Street madness are where the biggest partiers stay.  Book a hotel with a balcony and toast with a few drinks, shoot off 14” Corkscrew Confetti Sticks, and egg on the raucous crowd below you.  You might even catch a few soothing sounds of jazz up there too!

Although we hate to see the French Quarter Festival end, we do love the grand finale!  Most particularly, we enjoy watching stadium-size tissue streamers (2″ x 40′) shoot out of our Master Blaster Launchers and fly 100 feet above the crowd.  It’s an amazing spectacle and one we look forward to seeing every year!

If you want to see New Orleans at its finest, then head down for the French Quarter Festival.   It combines the best cuisine, culture, and music with the best city and architecture to produce the best party on the planet!

About Flutter FETTI®: Flutter FETTI is an innovator, manufacturer, and worldwide distributor of confetti and streamer products.  Our mission is to bring excitement and joy into every special event in your life.  Contact one of our confettiologists and we’ll make the right product recommendation to add the “WOW!” effect to your French Quarter Festival party.