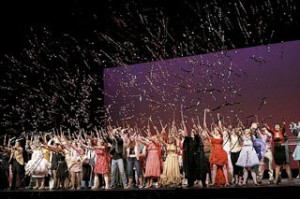 Musicals, ballets, and plays all have one thing in common:  to entertain the crowd with beautiful visual effects, whether through graceful body movements, enchanting light displays, or mesmerizing backdrops.

Recently, many theater directors and designers have also started to use confetti to enhance the on-stage excitement.  Flutter FETTI® is particularly useful because it’s innovative design makes it fly, float, and flutter in the air much longer, creating a spectacular and colorful effect.   Here are a few of the many expert uses:

Because Flutter FETTI floats and flutters so elegantly, it can be used to mimic the effects of nature.  During a Nutcracker ballet production or a play with a winter scene, shoot off white confetti with a 6” Continuous Flow Confetti Gerb Launcher to create a gentle dusting of snow.  Flutter FETTI can also be used to represent flying or dancing butterflies.  Using neon die-cut tissue butterflies, Busch Gardens has breathed life into its Katonga show!

Use Confetti in Lieu of Dangerous Elements

Many plays and musicals explore dangerous elements, like fire and explosives, which are difficult to portray on stage.  Hence, confetti is a perfect alternative!  In place of shimmering fireworks, stagehands can shoot metallic streamers from Master Blaster Confetti Launchers and ignite the whole scene.  In place of a large fire with ashes, launch white and silver tissue confetti from a 3” Continuous Flow Confetti Gerb Launcher and cover the entire stage.

Create a Magical Ambiance with Confetti

Confetti is extremely versatile and can be used for so many different purposes, whether it’s to build up the drama in a scene or exaggerate a celebatory moment.  Whatever the reason, theater directors and designers know that Flutter FETTI creates the most magical ambiance.  Audiences watching Spirit of the Dance, The Producers, and Footloose have all been delighted by the sensational visual effect of confetti on stage!   There are so many options meaning confetti can meet any director’s artistic vision.

Celebrate the Final Act with Confetti

Before the curtain falls, actors, conductors, and other integral cast members often emerge on stage to take a bow.  This is the ultimate moment for a confetti celebration!  Give everyone on stage 14” Flutter FETTI Confetti Sticks and whip up a whirlwind of confetti with just a flick of the wrist – you’ll have everyone jumping out of their seats for a well-deserved standing ovation!  Most importantly, Flutter FETTI® can be cleaned up in a snap once the curtain does fall.  Could there be a more perfect ending?

Have you used or seen Flutter FETTI in a theater production?  What was it used for and what did you think?

About Flutter FETTI®: Flutter FETTI is an innovator, manufacturer, and worldwide distributor of confetti and streamer products.  Our mission is to bring excitement and joy into every special event in your life.  Contact one of our confettiologists and we’ll make the right product recommendation to add the “WOW!” effect to your theater production.