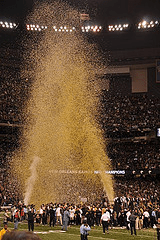 It’s the Major League Baseball World Series.  Bases are loaded.  Bottom of the ninth.  Two outs.  Who can you depend on to make the big play at the end of the day?  Flutter FETTI!

The Boston Red Sox recently celebrated their big win over the St. Louis Cardinals in the 2013 World Series.  Yet regardless of who won the finals this year, one thing was for certain:  our amazing Flutter FETTI confetti and streamers would be there at the final glorious moment.

Our confetti and streamers are ideal for World Series celebrations and any baseball victory celebration, from the College Baseball World Series to Little League Championships.  Here are the ultimate fan favorites:

X-6 Double Barrel BATTERY-OPERATED Wireless Confetti Launchers (no electricity required) – Blast off stadium-sized streamers and clouds of confetti as your team storms the bench to celebrate on the pitcher’s mound.  The culmination of color, sound, and sweet victory will send shivers down your spine!

14” Flutter FETTI Confetti Sticks (custom colors) – Hand each player and dedicated fan a handheld stick and shoot them off simultaneously with just a simple flick of the wrist.  Watch team-colored confetti float, fly, and flutter through the air adding to the already elated mood.

6” Continuous Flow Confetti Gerb Launchers – Transform your float into a magical machine with the high-powered Gerb.  It shoots pound after pound of confetti up to 100 feet in the air, covering the cheering crowd in a blanket of team colors!

This year’s World Series may be over, but spring training and another year of baseball is just around the corner.  Remember to celebrate with Flutter FETTI and you’ll always have a hit!

About Flutter FETTI®: Flutter FETTI is an innovator, manufacturer, and worldwide distributor of confetti and streamer products.  Our mission is to bring excitement and joy into every special event in your life.  Contact one of our confettiologists and we’ll make the right product recommendation to add the “WOW!” effect to your baseball celebration.