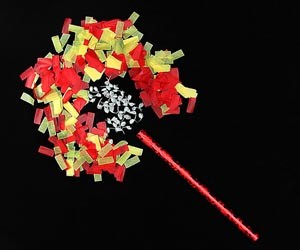 Whether you call it Fourth of July, Independence Day, or July 4th doesn’t matter, because on that day every American is thinking the same thing:  barbecue!  The Fourth of July barbecue is an age-old tradition replete with smoky grills, eye-catching fireworks, cold beers, and competitive sports.

While this sounds fun and exciting for adults, it’s not all designed for children (big or small).  We all love our barbecues so don’t let that stop you!  Make your Fourth of July barbecue more kid-friendly by considering these tips from your experts at Flutter FETTI®:

Kids get hungry quickly and they tend to swarm the area where food is located.  So you need to get them excited about something that doesn’t involve hot grills and sharp objects.

Rather than cooking up their food on the grill, pack a picnic lunch for each little one.  Make pulled pork sandwiches with coleslaw or chicken sandwiches with BBQ sauce.  Pack little side containers with potato salad, buttered corn, and baked beans and throw in some desserts like chocolate brownies and juicy watermelon.  The kids will feel like they’re eating straight from the barbecue buffet, but the picnic concept will make it safer (plus with everything going on that day, it’s easier and quicker too).

Fireworks are so much fun and epitomize our Fourth of July celebrations.  Children especially love to watch them, but holding the fireworks is a whole different matter.

Fortunately, Flutter FETTI has a brilliant alternative.  By giving your kids 14″ FireCracklers Confetti “Snappers” at the barbecue you allow them to participate in the Fourth of July fun while simultaneously staying safe.  With just a flick of the wrist, red, orange and yellow confetti strips launch out of the tube along with little snappers that “pop” when they hit the ground.  They’re colorful, noisy, and electrifying, just like fireworks!

Ice-cold beers and bourbon cocktails are a staple of Fourth of July barbecues.  They’re great for adults, but your kids need other fun ways to quench their thirst.

One kid-friendly alternative is to help them set up a lemonade stand.  They could sell the lemonade to passers-by or simply mix, pour, and hand out lemonade to friends and family at the barbecue.  If your children are on the older side, turn the stand into a little bar and let them mix “mocktails” like Shirley Temples or Pina Coladas.

After the adults knock back a few cold ones, that game of touch football or softball becomes quite fierce and competitive.  What can your children do instead?

Create a separate game space for all the kids in the nearby park or woods.  Play capture the flag using American flags and celebrate the winning team by shooting off custom-colored 14” Flutter FETTI confetti sticks with red, white, and blue confetti!  Does it get anymore patriotic than that?

Now when July 4th rolls around, you won’t have to fret.  Your Fourth of July barbecue will have plenty of kid-friendly activities, food, drinks, games, and confetti to put smiles on all their little faces!

Do you have any other creative kid-friendly ideas for Fourth of July barbecues?  Let us know!

About Flutter FETTI®: Flutter FETTI is an innovator, manufacturer, and worldwide distributor of confetti and streamer products.  Our mission is to bring excitement and joy into every special event in your life.  Contact one of our confettiologists and we’ll make the right product recommendation to add the “WOW!” effect to your Fourth of July barbecue.