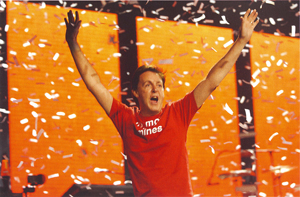 At Flutter FETTI, we’ve worked directly and indirectly with a lot of celebrities over the years bringing joy to their concerts, television sets and movie shoots. We’ve captivated fans of Taylor Swift, brought a burst of color to the set of Dancing with the Stars, and whipped up some “WOW!” factor at Paul McCartney concerts.

The 18” Airless Confetti Launcher is one of our most popular products. What makes it such a hot party favor?
• It uses a revolutionary design to launch confetti without Co2. All it takes is a ‘flick of the wrist’!
• You get a double shot with this confetti launcher, so two times the fun of a smaller confetti stick!
• It shoots 15’ to 20’ in the air making it perfect for indoor venues like TV studios that feature higher ceilings
• And of course, it’s ‘as seen on TV’. It’s what everyone has been asking about it!

If you’re interested in the Live with Kelly and Michael Airless Confetti Launcher, then we have exactly what you need at Flutter FETTI. It’s available to everyone and you can buy it online right now. Don’t forget to signup for our newsletter (look for the form below the categories in the left hand column) so you can take advantage of all our great deals!