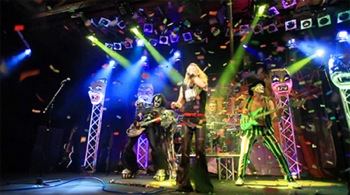 Hosting a New Years Eve concert is a lot of work and there’s plenty of pressure on you to get it right.  From promotion to setup to security, you already have plenty on your mind.  Yet it’s important not to forget that the audience is #1 and you need them to leave with smiles on their faces.  Flutter FETTI® is a master of turning ordinary concerts into extraordinary shows and New Years Eve is no exception.  Check out 5 awesome ideas to liven up the crowd at your NYE concert:

Most concerts are about the music.  New Years Eve is about the moment.  As the clock approaches midnight, build up the music, count down with the crowd, and do a huge “drop”.  Yes, we mean something similar to Times Square’s ball drop or New Orlean’s Gumbo Pot drop.  What is your event all about?  Maybe do a classic ball drop, a giant Champagne bottle drop, or slowly drop the lead singer from the stage and have him/her enter the crowd for a big song.  We also think that showering your audience in Flutter FETTI with a Continuous Flow Confetti Gerb Launcher is a winner too.  Imagine the scene as a blizzard of multi-colored confetti falls from the sky while the band plays its latest hit single!

2.  Reflect on the year via video

Remember when that guy won the hotly contested Olympic race or when the soldiers returned home from a great battle unscathed?  So much happens in one year that our memories can barely retain it all.  However, now is the perfect chance to blend music with video and create the ultimate New Years Eve collage.  While the band is rocking the crowd, show a video in the background of this year’s top (positive) moments.  The memories will come flowing back, happy emotions will run high, and everyone will be excited for what’s to come next year!

3.  Kick off the New Year with a bang

Concerts are so much fun, yet the moment the clock strikes midnight is indescribable.  It’s filled with so much emotion and so much energy that you have to embrace the moment and make it more powerful than anyone could ever imagine.  When that moment comes, celebrate with a huge burst of confetti from X-6 Electric Launchers!  The crowd will go absolutely insane with excitement and the band will definitely feed off that energy to keep the crowd dancing all night long!

Some songs have universal appeal.  Whether your concert’s music style is rock, hip-hop, house, or classical, Auld Lang Syne is one of those songs that appeals to every type of audience.  The Scots poem is synonymous with New Years Eve and it would only be right to request that a band play this song when the clock strikes midnight.  Of course, if that’s not in the cards then there are plenty other songs you could play, including U2’s “New Years Day”, Foo Fighters’ “Next Year”, and even Snoop Dogg’s “New Years Eve”.

Concerts are a big draw for any venue, especially on New Years Eve.  Concerts with a surprise or special guest are even more alluring.  If you have the cash, or just the suave factor, convince another talented and popular musician to join your concert for the evening and promote the mysterious figure all over the place.  When he or she walks out on stage, the crowd will go wild, social media sites will be abuzz with the news, and your venue and party will get a boost in popularity.  With a show like that, it shouldn’t be a problem to convince people to attend your party again next year!

About Flutter FETTI®: Flutter FETTI is an innovator, manufacturer, and worldwide distributor of confetti and streamer products.  Our mission is to bring excitement and joy into every special event in your life.  Contact one of our confettiologists and we’ll make the right product recommendation to add the “WOW!” effect to your New Years Eve concert event.