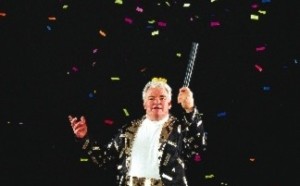 In 1984 l was living in New Orleans and working at the Louisiana’s World Fair.  At some point after the Fair, I received a call from recent coworkers.  They told me they found someone who made confetti products, which would be perfect for Mardi Gras events, and asked if I had any connections with the Mardi Gras krewes.  I said, “Of course I do”, and convinced them to come to New Orleans so I could set up some meetings.  And who should appear in New Orleans with my friends?  Jim Watkins.

Now if you ever met Jim Watkins you know he was not your ordinary man – he weighed 350 lbs, had silvery white hair, and a booming voice.  He was also charming and friendly with the most contagious laugh I had heard.  From the moment he walked in and started demonstrating his various confetti products I was hooked on Jim’s enthusiasm and vivacious personality.

One night we went to dinner at Commander’s Palace, an historic and upscale restaurant in the Garden District of Uptown New Orleans.  It was everything I expected – a delicious dinner and great conversation – until Jim unexpectedly stood up, pulled out some confetti tubes from his pocket, and said “Hi I’m Jim Watkins and I want to introduce you to Flutter FETTI” before proceeding to shoot them off in the middle of the dining room!

Yes – I was in shock.  It was one of those OMG moments!  Had it been any other time, we probably would have been asked to leave, but fortunately Ella Brennan, the owner of the restaurant, was present and started immediately clapping.  She loved it!  Everyone else in the restaurant began clapping and cheering on Jim.  I was so relieved!

Of course, I loved it too, so when Jim asked me to join him as sales support, I jumped at the opportunity.  With our teamwork, Flutter FETTI grew quickly and when Jim eventually decided he had to return to his construction company full time, he asked me to buy him out.  And that’s exactly what I did.

Before Jim handed everything over, he invited me up to his factory in Maryland where he created and tested all his confetti innovations.  Boy, it was quite the sight!  There were holes in the roof and a lawn chair in the center where Jim would sit in the middle of the night shooting off his latest inventions.  It was just another sign of his larger-than-life personality – he was full of ideas, a truly clever man, and always looking for new ways to “Flutter FETTI the world”!