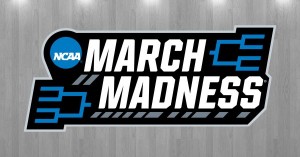 March Madness is officially underway!  Beginning with 68 teams, the numbers continue to diminish until just the “Sweet Sixteen”, “Elite Eight”, and then “Final Four” remain. The NCAA Division I Men’s Basketball Tournament reaches the ultimate fan frenzy for the Championship game held early April.  The Flutter FETTI Team are experts at getting the crowd pumped up and on their feet at all kinds of sporting events!  Read on for suggestions on how to create stir up team spirit! 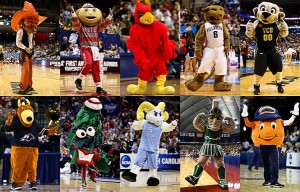 Hear the cheers and applause as the team mascot zig zags through the seats “FETTI-ing” the crowd along the way. Our 18″ Airless Confetti Launcher with Metallic FETTI Streamers in Custom School Colors will thrill the spectators and make the game even more memorable.   Our Master Blaster Launchers are a big hit.  Mascots can shoot these filled with 2” X 40’ streamers into the stands to generate excitement! 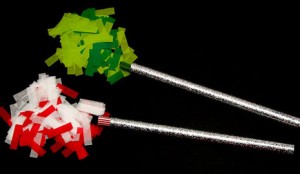 Get the crowd involved with our 14” Flutter FETTI Confetti Sticks in Custom School Colors.  As the band plays the school’s Fight Song, imagine the awesome effect of confetti raining down from the crowd! Using our Confetti Sticks, fans can show their ultimate school spirit with a simple flick of a wrist. 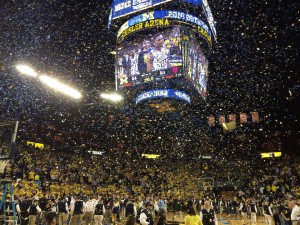 The buzzer sounds and the game is officially over. Players, coaches, and the crowd erupt with joy for the winning team. This victory will be a sight to remember when you set up the Continuous Flow 3” Gerb Launcher or 4 Remote Controlled X6 Wireless Confetti Launchers.

The mission at The Flutter FETTI Fun Factory is to bring excitement and add life to all types of events. The beautiful visual effects of our amazing confetti and streamer products kick energy levels up high and spread smiles everywhere. Flutter FETTI products are energizing, captivating and make the world a happier place!

Contact one of our confettiologists via e-mail or toll-free at (877) 321-1999 and we’ll make the right product recommendation to add the “WOW!” effect to your sporting event.